The recent endorsement deal signed between former NFL quarterback, Colin Kaepernick, and Nike has triggered a flood of differing opinions across the political spectrum. The public outcry over the deal is an extension of the debate prompted by the Kaepernick’s decision to kneel during the national anthem prior to games—a move that has morphed into a powerful political statement against police brutality and racial oppression.

Upon Nike’s announcement of the deal, social media channels and media houses turned into avenues for debate, with a section of commenters praising the apparel giant for the move and praising its stance of social issues.

An opposing faction, however, condemned the move, with some even posting picture of cut up and burning Nike apparel while also calling for a country-wide boycott of Nike products.

Supporters of the movement, which include sport stars like Serena Williams, Lebron James, and NFL superstar, Tom Brady, hailed the deal, praising Nike for taking a stance on such a contentious social issue. 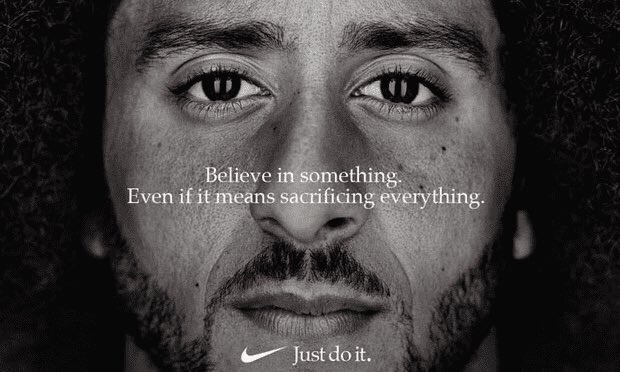 NFL athletes have also reacted to the endorsement deal: showing support for their former colleague who has been out of the league for two years—with many attributing his lack of employment to league wide collusion among owners as a result of his social movement.

San Francisco 49ers cornerback Richard Sherman, tweeted: “Proud to be an @usnikefootball athlete. Stand for something or fall for anything. Few moments in history has that been more true!”

However, detractors of the move have accused Nike of minimizing the efforts of service men and women by endorsing Colin Kaepernick’s movement. Arguments against the merits of such an endorsement rang out from musicians, athletes, and an outspoken critic of kneeling NFL players, President Donald Trump.

Trump, while speaking to TheDailyCaller, recognized Nike’s right to make its own decisions and endorse whoever it wanted, stating that the deal was “ultimately a business decision”. He decried, however, the “terrible message” the endorsement sent, stating that “there is no reason for that.”

Trump further reiterated his stance on the question of players kneeling for the anthem, stating, “It is what this country is all about, that you have certain freedoms to do things that other people think you shouldn’t do, but I personally am on a different side of it.”

The NFL, who currently have a sponsorship deal with Nike that runs through 2028, acknowledged the issues raised originally by Kaepernick’s agitation. The league has so far failed to decide on how to handle player protests before games—as it is currently engaging in meditative talks with the players union.

Jocelyn Moore, the NFL’s executive vice president of communications and public affairs stated that, “We embrace the role and responsibility of everyone involved with this game to promote meaningful, positive change in our communities,” and that, “The social justice issues that Colin and other professional athletes have raised deserve our attention and action.”

The endorsement deal which is a part of Nike’s 30th anniversary will see the divisive figure feature prominently in Nike advertisement campaigns—with his figure expected to be featured prominently on billboards, TV spots and campaign posters. The deal is also expected to net Colin Kaepernick an apparel deal, which includes the release of a signature shoe, and donations to his Know Your Rights charity.