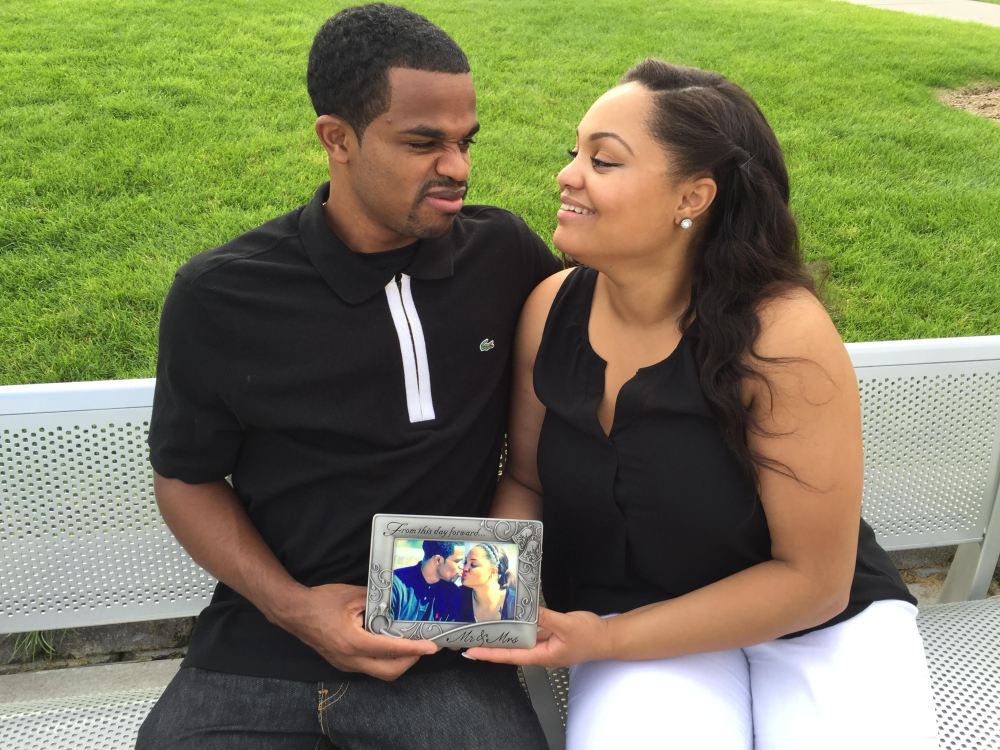 Tell us about yourself. Where are you from? Where do you live now?

James and I were both born and raised in Omaha, NE. We currently reside in Dallas, TX. James is a self-employed basketball trainer. I am a Spa Manager for Life Time Fitness, fellow published author & freelance writer. We are homebodies, but love the occasional dinner and a movie! We also like to travel when we can pull ourselves away from our busy schedules. We just became cat parents (LOL) and just celebrated our 3rd anniversary in September.

How did you meet?

James and I grew up together. We met when I was 8… he was 11. His father is the pastor of the church that I grew up at. I had a crush on him as a child and always dreamed of dating/marrying him, but I never thought it would actually happen!

Describe the moment you knew you belonged together.

We knew we belonged together about a week after we started courting. We’ve known each other since childhood, but we never connected romantically until just three years ago. Since we’ve known each other forever – it didn’t take long to know we were meant to be; once we actually took our relationship to that next level.
I wrote a book about my first marriage & how James and I came to be – check it out at NoGoodThing.com.
What makes your relationship work?

James says the fact that we understand each other. I agree and I feel that our mutual respect & kindhearted natures make our relationship work. We have very similar temperaments. James is the kind of guy that women would say is “too nice.” I’m the girl who guys would probably call “clingy.” I love that he is sweet and kind; he loves that I’m affectionate and doesn’t consider that being clingy.

We both love to keep things drama free and aim to please each other. We’ve both been hurt before and endured bad first marriages. We know the perils of divorce, so there are certain lines we simply do not cross with each other. We also both hate arguing so we just don’t. This can be a challenge sometimes because it’s hard for us to speak up about issues that we may have because we both want to avoid conflict and are afraid of hurting/offending one another.

What’s your favorite thing about each other?

James says his favorite thing about me is that I am easy going and fun. He says I’m open, honest and easy to talk to. He likes that he doesn’t have to guess with me, “what I see is what I get with you.”

My favorite thing about him is his kindness. It sounds simple, but it’s refreshing to have a man who speaks to me with love and kindness in his voice and his words. Before James, I’d never had a man truly love and care for me unconditionally the way he does.

Tell us about your funniest moment together.

Last December, I was expecting a package in the mail. I was working late and I asked James to pick the package up from the leasing office for me. James usually always remembers to do things when I ask. I, on the other hand, am very forgetful.